Originally released by Empire in 1995 in both Halloween and Christmas designs, Light Toppers came in three different versions:

For 1995, Empire reused existing tabletop mold designs and manufactured within their own facilities. These versions can be easily identified by looking if the light socket hole in the back is not drilled out, and instead factory sealed. 1996 would see all new designs, now produced in China. Other existing tabletop mold designs would later be introduced into the product lineup; such as the Christmas tree.

Both the Tree Light Toppers and Complete Light Toppers versions would only last into the 1997 season; leaving only the Pathway Light Toppers version to continue production until Empire’s 2000 closure. 1998, 1999 and 2000 would all see the introduction of new designs and an occasional discontinuation of older designs. Empire’s 1997 Easter catalog would include a new bunny design alongside two new egg designs—however it is unknown whether they were produced. Many designs are adapted versions of pre-existing Empire blow mold designs.

Less than a year before Empire’s closure, their Light Toppers patent (filed in 1996 under the name “Home Decoration System”) would be issued in 1999. After Empire’s 2000 closure, General Foam Plastics would acquire the rights and re-stamp each mold with their name. General Foam Plastics would continue to sell the Pathway Light Toppers version for several more years, however they would not introduce any new designs.

Both Empire and General Foam Plastics would import their Light Toppers from China. It is unclear what company within China was responsible for manufacturing. 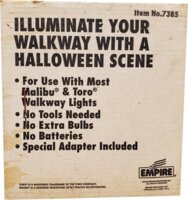 No photo Do you own this blow mold? Please consider submitting a photo. Submit a photo